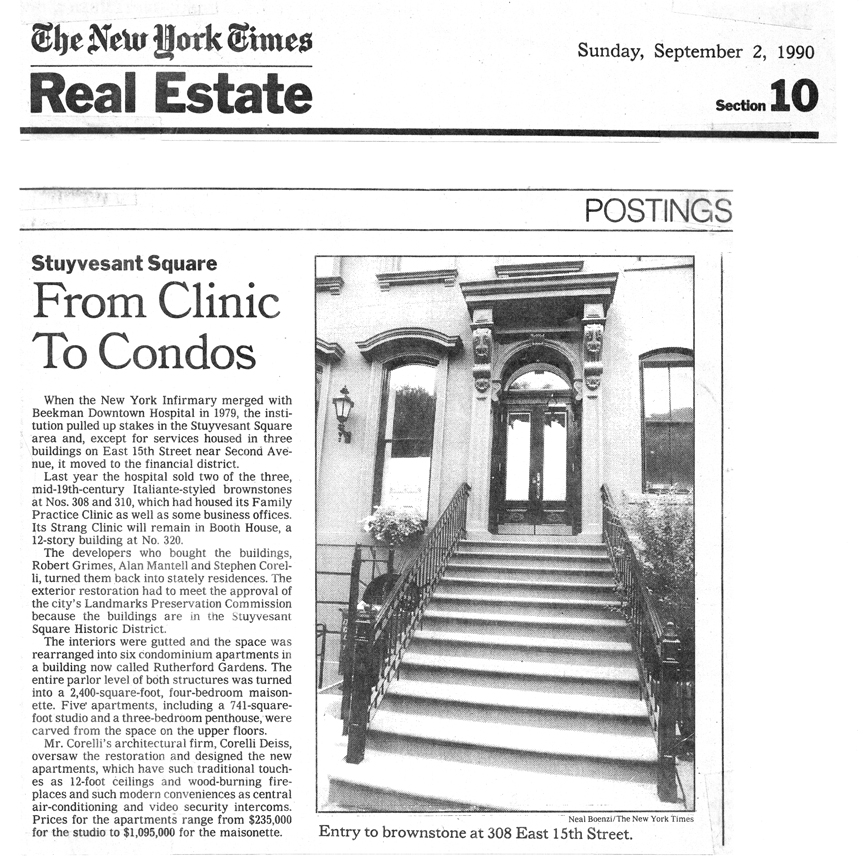 FROM CLINIC TO CONDOS

When the New York Infirmary merged with Beekman Downtown Hospital in 1979, the institution pulled up stakes in the Stuyvesant Square area and, except for services housed in three buildings on East 15th Street near Second Avenue, it moved to the financial district.

Last year the hospital sold two of the three, mid-19th-century Italiante-styled brownstones at Nos. 308 and 310, which had housed its Family Practice Clinic as well as some business offices. Its Strang Clinic will remain in Booth House, a 12-story building at No. 320.

The developers who bought the buildings, Robert Grimes, Alan Mantell and Stephen Corelli, turned them back into stately residences. The exterior restoration had to meet the approval of the city’s Landmarks Preservation Commission because the buildings are in the Stuyvesant Square Historic District.

The interiors were gutted and the space was rearranged into six condominium apartments in a building now called Rutherford Gardens. The entire parlor level of both structures was turned into a 2,400-square-foot, four-bedroom maisonette. Five apartments, including a 741-square-foot studio and a three-bedroom penthouse, were carved from the space on the upper floors.

Mr. Corelli’s architectural firm, Corelli Deiss, oversaw the restoration and designed the new apartments, which have such traditional touches as 12-foot ceilings and wood-burning fireplaces and such modern conveniences as central air-conditioning and video security intercoms. Prices for the apartments range from $235,000 for the studio to $1,095,000 for the maisonette.